What’s the Difference Between Invisalign Teen and Invisalign for Adults? 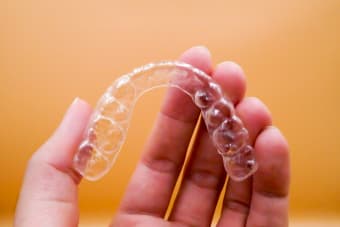 You may know about Invisalign, a brand of clear aligners which straighten teeth - minus metal or wires. But there's also a line of Invisalign just for teens, and today our SmileTown Orthodontics Braces & Invisalign orthodontists would like to highlight a few aspects that make Invisalign Teen different.

Let’s begin with a quick explanation of Invisalign itself.

Invisalign is a series of smooth, clear plastic aligners used to straighten teeth. Since they're transparent, they have a discreet appearance that's great for adults and teens who are concerned about the aesthetics of their smiles, for social or professional reasons.

The aligners arrive in a series, and each set in the series should be changed every other week or so. This decreases the need for frequent visits to the orthodontist's office, since they don't need adjustments - you can just switch them yourself.

Invisalign aligners are also removable - you can take them out to eat, and to brush and floss your teeth. This gets rid of the dietary limitations related to traditional braces. It also means you can brush and floss just as you normally would!

How is Invisalign Teen Different?

Invisalign Teen is almost the same product, with a few critical differences?

On Invisalign Teen aligners, you'll find small blue dots that fade after wearing them for two weeks. These can prove helpful because on average, teens tend to be less compliant with orthodontic treatment, and don't always wear their aligners as prescribed. These blue dots fade only after the aligners have been worn for a total of two weeks (336 hours), which would have allowed the required tooth movement to occur.

While we do not recommend doing this, aligners can be worn part-time until the blue dots fade.

Teens who still have some baby teeth (or adults whose adult teeth are still growing in) can wear Invisalign Teen as spaces in the aligners allow adult teeth to erupt.

We know that teens can sometimes be a little irresponsible with their things, and aligners may easily get lost or damaged. Not to worry with Invisalign Teen, as they come with 6 sets of replacement aligners to help reduce worry over lost or broken aligners, and to help ensure that treatment continues according to plan.

Wondering if your teen could be a candidate for Invisalign Teen? Contact us at SmileTown Orthodontics Braces & Invisalign for a consultation with our team to learn more.

We provide comprehensive orthodontic treatment for children & adults in Burnaby, Langley, Surrey / North Delta, and across the Lower Mainland. Get in touch with us today to get started with braces or Invisalign!